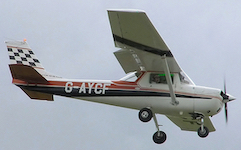 If you’ve already earned a Private Pilot certificate – a PPL they call it in some other parts of the world – you’ll probably remember those final words of encouragement from the government official who oversaw the checkride … “Remember, you now have a license to learn.”

That’s instructor lingo for, “No one has enough time to teach you absolutely everything you’d need to know in order to become a safe pilot.” All any instructor can really offer is solid training in line with the airman certification standards and as much extra personal wisdom as possible before they kick you out of the nest. The check pilot’s job is to within an hour or two get a glimpse of your knowledge about what makes an airplane fly – or prevents it – and that you seem to exercise relatively decent judgment. But sometimes, the barest minimum of training is called that for a really good reason.

When I was a newly minted private pilot with maybe 80 hours under my belt, I proved to myself one warm, sticky July afternoon that my practical flying education definitely had a few major gaps. The final few months of my private pilot training took place in an old, burgundy-painted Cessna 150 at Sky Harbor Airport. No, not the one in Phoenix, but a now bulldozed little field of the same name (OBK) just north of Chicago with a single 2,430-foot north-south runway. The field elevation was 680

feet and a graveyard stood ominously just off the south end of the airport, as a warning I often thought, not to swoop too low on final when landing north.

If you haven’t tried one yet, some 22,000 150’s were produced by Cessna in cookie-cutter fashion until they introduced the updated 152 in the late 1970s. The original 150 was powered by a 100 hp Continental O-200 motor that was just enough to lift two people airborne with a couple of hours of gas. Luckily for me, as a solo bird, it climbed OK, even in the summer.

One quirk that would become important that July day was the 150’s barn door-like flap system. When commanded, they’d drop to 40 degrees which made the airplane fall like a brick if the pilot pulled the throttle to idle about the same time. For retraction, the spring-loaded switch would bring all the flaps up in a few seconds if the pilot didn’t pay attention. I vowed never to let that get me.

After an hour or so of counting sailboats in Lake Michigan near the Loop that day and surveying areas north toward Waukegan (UGN) I realized it was time to head back and give my pal Tim a crack at the airplane for a few hours. The tollway extension to I-94 ran just north of the airport and was pretty easy to pick out from the lakeshore, as was the big yellow office building then used by Walgreens as a corporate HQ. Sky Harbor sat just south of Walgreens so making my way to a left downwind was a snap for a newly licensed guy such as myself.

Before you head off to read the ending to this tale, please check whether you’re a Jetwhine subscriber. If not, sign up on our home page so you don’t miss a single story about the inner workings of the aviation industry.

I announced on Unicom frequency that “50967 was entering a left downwind at Sky Harbor.” I didn’t hear anything and realized I probably had the pattern to myself. Abeam the 36 numbers, I reduced the power and added 10 degrees of flaps. I didn’t need to look at the flap indicator since my instructor had taught me a trick; “hold the switch down, count to four and you’ll add about 10 degrees of flaps.” On base, power back again and “One, two, three, four,” and let go of the flap switch. On final, I went to 30 degrees as I made my radio call “Cessna 967 on final for 36 at Sky Harbor.” It was met only with silence. 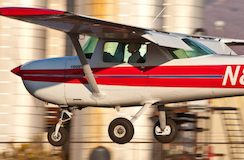 With the graveyard in sight just short of the numbers, I went for 40 degrees already thinking I’d make the first turnoff near the tiedown since the airplane didn’t need any fuel. It was about then that I saw that single-engine airplane pull out on to the runway. No radio call, he just taxied on to the runway. I knew he couldn’t be crossing because there was nothing on the west side of the runway.

“Cessna 967 is short final 36 at Sky Harbor,” I said, almost pleading with the other guy to get moving. I  slowed to around 60 mph, but the guy just sat there. At a hundred feet or so, I knew I needed to do something, so I pushed the throttle all the way in and the nose of the old Cessna pointed itself toward the blue sky above me. I remember my shoulders began shaking as I pushed hard against the control wheel trying to keep the airplane under control. The wings seemed to be wagging and I remember drifting to the right side of the runway where I saw some other airplanes and cars parked. With me approaching at 100 feet and the flaps down full, people near the cars began to scatter with most of them heading back toward the hangar.

Why I even noticed them I’ll never know because the stall warning was intermittently blaring sounding like someone strangling a chicken. I saw the hangars on the east side of the runway coming up even closer, enough that I worried my wheels might touch them as I started a gentle turn back toward the runway. I don’t think I’d climbed a single foot yet and as my eyes darted around the cockpit, I couldn’t think of anything else to try as I saw the Walgreens building come into view.

My left hand seemed to have frozen on the control wheel while my right one just kept shaking on the throttle. Then it happened. I saw the vertical speed indicator flip up slightly and then again a few seconds later. I tried pulling the wheel back ever so slightly, but the airplane felt as if it were going to fall out from under me so I stopped. The stall warning was also still yelling but the altimeter read about 900 feet. I knew that was good, but then I saw the office building looming closer again.

I don’t even remember why I let go of the throttle and grabbed the flap switch, but I must have retracted about 10 degrees of flaps because the VSI jumped again, thankfully up. I pulled up more flaps and the airplane seemed to leap up as if someone had removed a big weight tied to the tail. I felt the pressure on the control wheel ease some too.

The Walgreens building passed beneath me but no way was I going to try turning. As the altimeter wound up past 1,100 feet, I finally remember breathing again. I had no idea when I’d last tried that. I looked over at my right hand resting on the flap switch and must have had one of those “duh,” moments in my aerodynamics training, but I hit it again and brought up the rest of the flaps. I quickly realized that now I was going to outclimb the traffic pattern so I pulled the power back and reentered the downwind.

I saw Tim waiting near the tiedown as I taxied in after a successful landing. He walked over after I shut down and asked me, “What the heck were you doing after that guy pulled out in front of you?” I just stared at him for a few seconds before I blubbered out something like … “Scaring that crxx out of myself.” He looked at me and said, “I guess you learned something eh?” All I could do was nod as he began his preflight.

I was still shaking as I opened the Cessna POH a few minutes later looking for the go-around procedure. It said, “Add full power, select flaps 20 and a climb at 65.” Maybe my instructor has mentioned go-arounds during training, but I know we never actually tried one … ever. I know I never saw or heard anything about raising the flaps.

Years later when I began teaching people to fly, I made it a point to demand at least three decent go-arounds – among other bits of knowledge of course – out of my students before I’d even sign them off for solo, let alone for a check-ride.

BTW, if you enjoyed this story, please tell your friends or suggest they subscribe. It doesn’t cost a dime and you can cancel at any time.