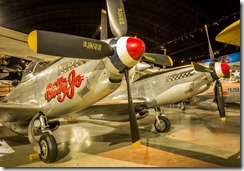 As it would any dedicated aviation geek, the photo of the P-82 Twin Mustang with Betty Jo emblazoned on its nose at the start of a New York Time’s obituary caught my attention. So did the headline, “Robert Thacker, 102, Dies; Survived Pearl Harbor to Fly in 3 Wars.” The subhead only added to my confusion. “This unarmed bomber was caught in the thick of Japan’s attack. He went on to fly some 80 missions in World War II and to become a record-setting test pilot.”

Okay, so what does that have to do with the P-82 Betty Jo, which I’ve admired during my visits to the Museum of the United States Air Force? As a reward for my continued reading, the obit answered my question about a half-dozen paragraphs later. With the war over less than two years, in February 1947, Thacker and his copilot, Lt. John Ard, flew Betty Jo from Hickam Field in Hawaii to New York City—nonstop—in 14.5 hours. The 5,051-mile flight is the sanding nonstop record for a prop-driven fighter.

Just to make that flight interesting, a mechanical glitch prevented Thacker from dropping some of the P-82’s four auxiliary under-wing tanks, so he had to adjust for asymmetric drag for a good portion of the flight. Betty Jo, the name of Thacker’s wife, had 30 minutes of fuel in its tanks when it landed in New York. Geez, my backside and leg hurt just thinking about it. 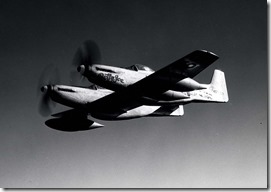 More importantly, learning Thacker’s story reminded me that people make aviation history every day. And if they survive a signature event nearly every aviator knows, like piloting a B-17 that arrived in Hawaii in the midst of the attack on Pearl Harbor, they continue to make history, although it may not be as well known. It should be a reminder to all of us to wonder what happened to history’s participants in the weeks, months, and years that followed.

Thacker went on to fly 80 missions in the Pacific and European theaters, an accomplishment of remarkable survival in itself. After the war, he joined the cohort of test pilots at what is now Edwards Air Force Base. In Korea he flew B-29 missions, and in Vietnam, “high altitude missions” with (as yet) no telling tidbits of their details.

What is most telling about Thacker’s character and passion for flight is summarized by what ignited it, a model airplane the 8-year-old received from his father. As shown by his biography by the Academy of Model Aeronautics, his passion for flying models never waned. Before the war, he flew a hand-launched rubber-band-powered pusher model in the Junior Birdman of America, sponsored by Hearst Newspapers. After the war, he competed in the 1975 and 1976 National Scale Glider Championships. He designed the model of the Bowlus Baby Albatross glider, featured in the September 1975 issue of Model Builder, and he designed the Giant Ducted Fan BD-10 featured in the February 1994 Flying Models. 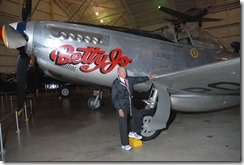 Each of us leaves a legacy compiled by our everyday acts of personal history. Some are better known that others, but few are as lasting and rewarding to succeeding generations as Thacker’s. After retiring and returning to California, he was looking for a place to fly his models. After meeting with the general, he helped establish the Joint Military RC Flyers, which welcome civilians and has been running at Marine Corps enclave of Camp Pendleton since 1970. – Scott Spangler, Editor