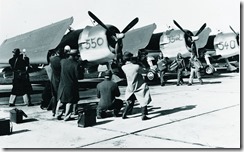 Among the six naval aviators recommended for command of an aircraft carrier was Captain Amy Bauernschmidt, a 1994 Naval Academy grad and helo pilot who ticked an essential box on the carrier command checklist when she was the first female to serve as executive officer on a nuclear-powered warship, the USS Abraham Lincoln CVN-72. It is an assignment long overdue, and with an idle moment wondered why it took so long compared to the female command achievements in the Air Force.

Taking the unique requirements of a floating command out of the equation, was this because the WASPS, the Women Airforce Service Pilots started paving the way in World War II? Did the US Navy have an equivalent, and if not there were no Navy WASPs, did any women fly in support of any aspect of naval aviation back in the day?

Asking Google about Navy WASPs produced about 791,000 results on the many different ships that have been the USS Wasp. Asking about female navy pilots during World War II circled me back to the WASPs. Following Rosie the Riveter led me to a story, “Women at Grumman During World War II,” on the Bethpage Union Free School District website. It said women “would build and repair the planes that American pilots would use for victory [and] some women even had the opportunity to become test pilots.” 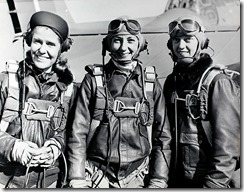 Fortunately, the story included a link to another, taken from the November 16, 1943, New York World-Telegram, “Women Pilots Casual About Testing Fighter Planes for the Navy,” by Staff Writer Sally MacDougall. Three women were among Grumman’s production test pilots, who flew F6F Hellcats and TBF Avengers after they rolled off the production lines, Teddy Kenyon, Barbara Jayne, and Elizabeth Hooker.

The story didn’t say much about them, other than they all stood about 5-foot-5 and weighed 110 pounds. “Mrs. Kenyon has been flying since 1929. Her husband is a flight engineer at the plant. Barbara Jayne’s husband, Lt. J.M. Jayne, flies fighter Hellcats for the Navy. Her log shows 2,300 hours. Elizabeth Hooker, a brunette in the trio, is a Smith College graduate.”

Following this lead led to Julia Lauria-Blum’s story, “Hellcat Test Pilot: Barbara Kibbee Jayne,” in the Metropolitan Airport News. From Troy, New York, she had a lifelong interest in flying but her parents wouldn’t give her “the official green light to pursue her passion” until she was 21. She earned her pilot’s license at the Ryan School of Aeronautics in San Diego. Facing gender discrimination, she finally found a job back in Troy as the first female instructor in the Civilian Pilot Training Program. 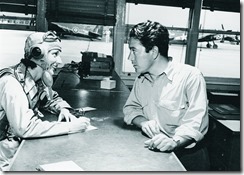 In 1941, Bud Gillies, head of Grumman flight operations, lured Barbara away from the CTPT with a position as the chief instructor at the posh Long Island Country Club. When the war started, she became a Grumman courier pilot, flying parts and people in passenger planes. In spring 1942 Gillies recruited Cecil “Teddy” Kenyon and Elizabeth Hooker, to join Jayne as the first female test pilots of naval aircraft. It turns out that Gillies’s wife, Betty, was also a pilot, and “a member of the Women’s Auxiliary Ferrying Squadron or WAFS.”

After the war, Barbara ran a GI training program at her FBO at Annapolis, Maryland. She returned to California in the 1950s and kept flying in her real estate business. “In her retirement, she flew often in Baja California Peninsula and with her friend, Betty Gillies, on a number of fly yourself safaris in South America, Africa, and Australia.” She died at home on October 17, 1999.

The New York Times, in a January 5, 1986 story, “Honoring Grumman and its Hellcat,” Ellen Clear wrote that Grumman employed five female test pilots during the war. She didn’t give their names. But Women in Aviation International’s 100 Most Influential Women in the Aviation and Aerospace Industry said Betty Gillies was a Grumman test pilot before she joined the WAFS, WASPs, and Air Force Reserve.

Timeline provided some more information on Teddy Kenyon. Another New York native who grew up dreaming about flying, she was also flying for Grumman’s courier service. She married Ted Kenyon, an MIT student and barnstormer, in 1926 and earned her pilot’s license three years later. “In 1933, she beat out 28 men and 11 women to win the National Sportswomen’s Flying Championship at Roosevelt Field in New York, and took home a $5,000 prize.” (The author didn’t explain how 28 participated or why they predominated in the “sportswomen’s” championship.) When she died in 1985 at age 71, she was still flying.

Google didn’t reveal much about Elizabeth Hooker. New England Aviation History said she bailed out of a burning Hellcat on June 9, 1944. “Miss Hooker came down about a mile from the crash site unharmed except for singed eyebrows.”

In the end, the only thing the Grumman test pilots had in common with the WASPs is that when the war ended, they were all out of their jobs. It would take three decades for women to fight their way into commercial cockpits and for the first females to graduate from military pilot training. The inaugural class of naval aviators earned their wings of gold in 1974 and the first Air Force cohort received their silver wings in 1977. That fall, President Jimmy Carter signed the bill that recognized the WASPs as veterans. But alas, the closest the Navy got to them were three, four, maybe five little known Grumman production test pilots. – Scott Spangler